Types of Engines ( opposed, in line and V)

The opposed-type engine has two banks of cylinders directly opposite each other with a crankshaft in the center. The pistons of both cylinder banks are connected to the single crankshaft.(left photo)
An inline engine generally has an even number of cylinders, although some three-cylinder engines have been constructed. This engine only one crank shaft, which is located either above or below the cylinders. If the engine is designed to operate with the cylinders below the crankshaft, it is called an inverted engine.(center photo)
In V-type engines, the cylinders are arranged in two in-line banks generally set 60° apart. Most of the engines have 12 cylinders, which are either liquid cooled or air cool. (right photo)

The foundation of an engine is the crankcase. It contains the bearings and bearing supports in which the crankshaft revolves. Besides supporting itself, the crankcase must provide a tight enclosure for the lubricating oil and must support various external and internal mechanisms of the engine. It also provides support for attachment of the cylinder assemblies, and the powerplant to the aircraft. It must be sufficiently rigid and strong to prevent misalignment of the crankshaft and its bearings. 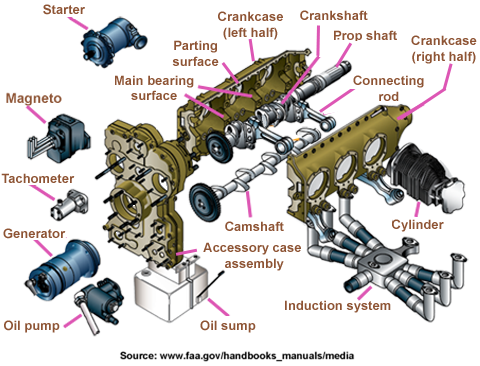 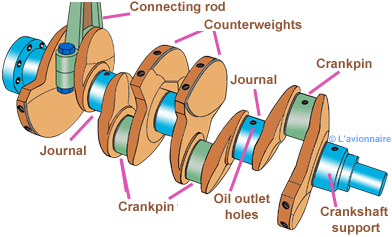 The connecting rod is the link that transmits forces between the piston and the crankshaft. Connecting rods must be strong enough to remain rigid under load and yet be light enough to reduce the inertia forces that are produced when the rod and piston stop, change direction, and start again at the end of each stroke. 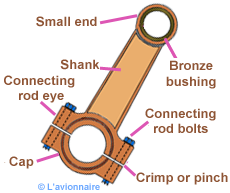 The portion of the engine in which the power is developed is called the cylinder. The cylinder provides a combustion chamber where the burning and expansion of gases take place, and it houses the piston and the connecting rod. 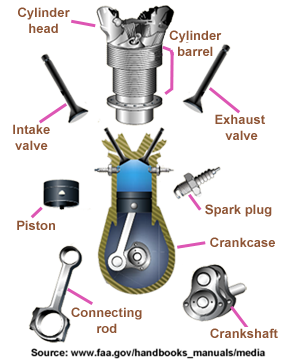 The valve mechanism of an opposed engine is operated by a camshaft. The camshaft is driven by a gear that mates with another gear attached to the crankshaft . The camshaft always rotates at one-half the crankshaft speed. As the camshaft revolves, the lobes cause the tappet assem- bly to rise in the tappet guide, transmitting the force through the push rod and rocker arm to open the valve. 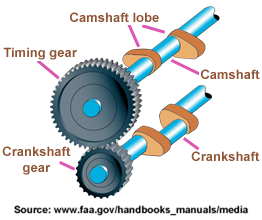 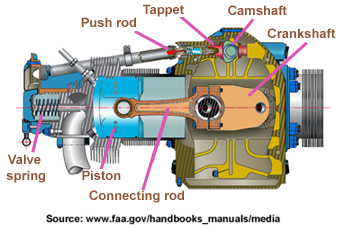 The radial engine consists of a row, or rows, of cylinders arranged radially about a central crankcase. This type of engine has proven to be very rugged and dependable. The number of cylinders which make up a row may be three, five, seven, or nine. Some radial engines have two rows of seven or nine cylinders arranged radially about the crankcase, one in front of the other. These are called double- row radials. 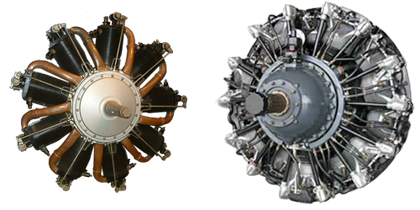 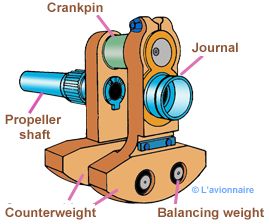 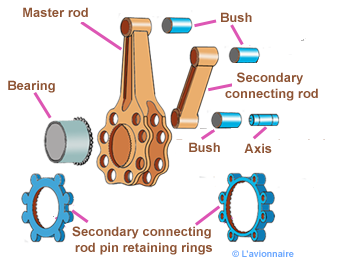 The purpose of the cylinder head is to provide a place for combustion of the fuel/air mixture and to give the cylinder more heat conductivity for adequate cooling. 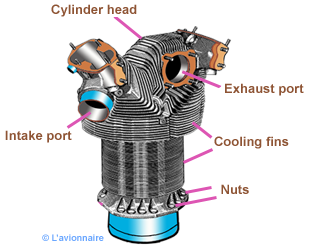 The valve operating mechanism consists of a cam ring or camshaft equipped with lobes that work against a cam roller or a cam follower. The cam follower pushes a push rod and ball socket, actuating a rocker arm, which in turn opens the valve. Springs, which slip over the stem of the valves and are held in place by the valve-spring retaining washer and stem key, close each valve and push the valve mechanism in the opposite direction. 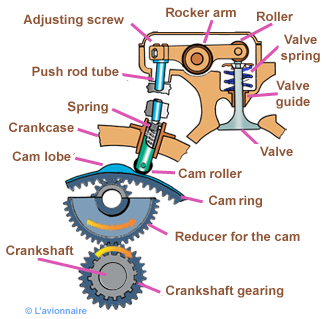