There are a myriad of techniques and instruments available to assist the pilot in navigating the aircraft. The type of instrument that can be found on a given aircraft depends on its level of sophistication: a light VFR aircraft is equipped with simple instruments while a airliner requires much more complex instruments.

Since the magnetic compass works on the principle of magnetism, it is well for the pilot to have at least a basic understanding of magnetism. A simple bar magnet has two centers of magnetism which are called poles. Lines of magnetic force flow out from each pole in all direc- tions, eventually bending around and returning to the other pole. The area through which these lines of force flow is called the field of the magnet.. 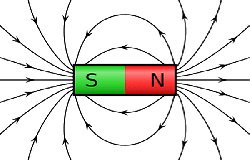 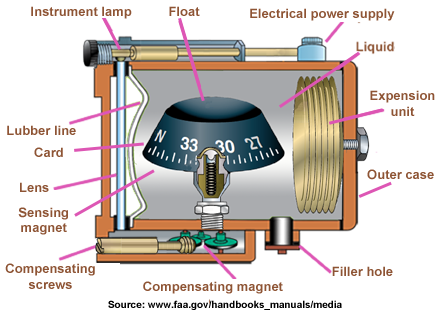 The gyroscopic compass is a compass whose heading indicator is adjusted to a given reference by means of an induction sensor.
Its purpose is :
- to provide the pilot with an accurate heading indication
- to provide the autopilot with a heading reference to be maintained
It is composed of:
- a magnetic field detector (fluxgat
- an azimuth servo
- an amplifier
- directional gyroscope (DG)
It can function :
- as a gyro compass (normal use)
- as a conventional directional gyro (emergency use
A schematic diagram of a gyro compass is shown below. 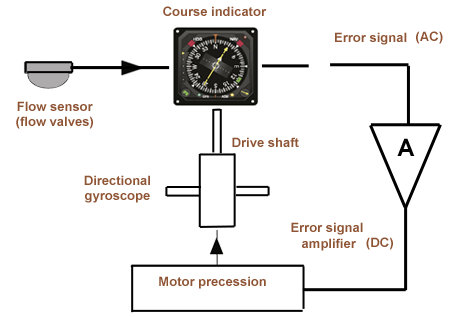 This assembly is presented externally in the form of a hemispherical bowl-shaped housing. Inside this housing is a flow valve which is suspended on a pendulum by a dial gear. This valve is free to swing within plus or minus 25° on the roll and pitch axes, but is integral with the aircraft in azimuth. The bowl is partially filled with liquid to dampen the oscillations of the flow valve. The assembly is installed in a location remote and free from any disturbing influence, usually at the wing tip or on the flap.


Cross section of a flow valve 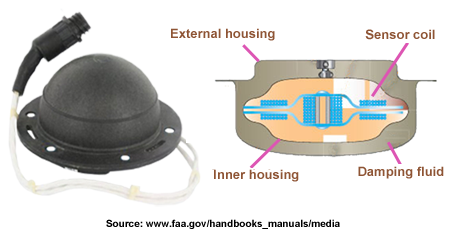 An inertial navigation system (INS) is a navigation aid that uses a computer, motion sensors (accelerometers) and rotation sensors (gyroscopes) to continuously calculate via dead reckoning the position, orientation, and velocity (direction and speed of movement) of a moving object without the need for external references.
The platform is kept horizontal with respect to land landmarks, regardless of aircraft movement. This is achieved by using gimbals that allow the platform to move freely in all three axes (pitch, roll and yaw). 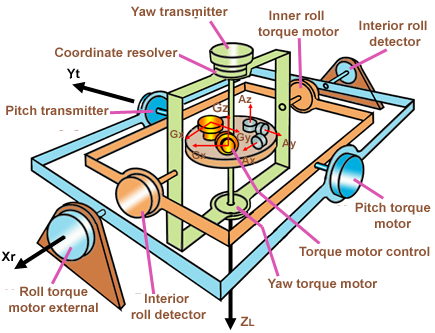 The ring laser gyro (RLG) is widely used in commercial aviation. The basis for RLG operation is that it takes time for light to travel around a stationary, nonrotating circular path. Light takes longer to complete the journey if the path is rotating in the same direction as the light is traveling. And, it takes less time for the light to complete the loop if the path is rotating in the direction opposite to that of the light, the path is made longer or shorter by the rotation of the path. This is known as the Sagnac effect. 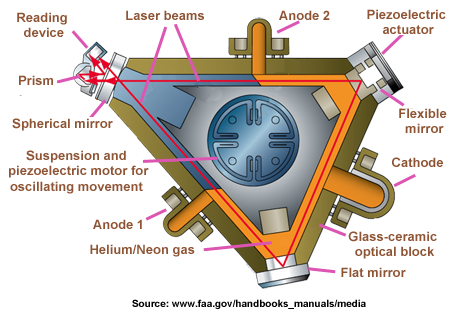