Aircraft structural members are designed to carry a load or to resist stress. In designing an aircraft, every square inch of wing and fuselage, every rib, spar, and even each metal fitting must be considered in relation to the physical characteristics of the material of which it is made. Every part of the aircraft must be planned to carry the load to be imposed upon it. Below the Cessna 172. 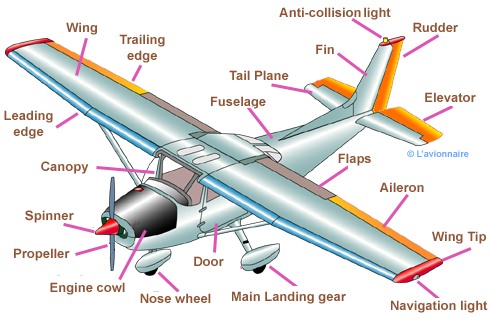 The wings of an aircraft can be attached to the fuselage at the top, mid-fuselage, or at the bottom. They may extend perpendicular to the horizontal plain of the fuselage or can angle up or down slightly. This angle is known as the wing dihedral.

The ribs are they are strengthened in some wings by tapes that are woven above and below rib sections to prevent sidewise bending of the ribs. Drag and anti-drag wires may also be found in a wing. 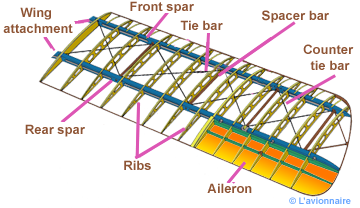 Wood ribs are usually manufactured from spruce. The three most common types of wooden ribs are the plywood web, the lightened plywood web, and the truss types.

Often, the skin on a wing is designed to carry part of the flight and ground loads in combination with the spars and ribs. This is known as a stressed-skin design. The all-metal, full cantilever wing section illustrated below shows the structure of one such design. 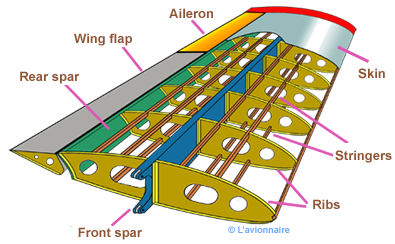 The fuselage forms the main body of the aircraft to which the wings, tail plane, vertical fin, and engine (in the case of a single-engine aircraft) are attached. In some aircraft designs, the engines and landing gear also attach directly to the fuselage structure.

The truss type fuselage frame is usually constructed of steel tubing welded together in such a manner that all members of the truss can carry both tension and compression loads.

The true monocoque construction uses formers, frame assemblies, and bulkheads to give shape to the fuselage. The heaviest of these structural members are located at intervals to carry concentrated loads and at points where fittings are used to attach other units such as wings, powerplants, and stabilizers. 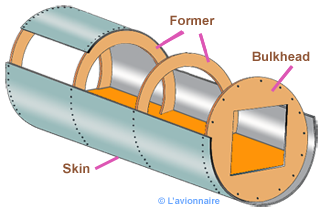 It also consists of the frame, bulkhead and formwork assemblies used in the monocoque. But, in addition, the skin is reinforced by longitudinal members called stringers. The stringers usually extend over several frames and help the skin to support primary bending loads. 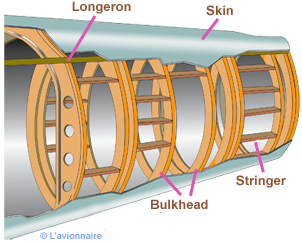