Thrust, drag, lift, and weight are forces that act upon all aircraft in flight. Understanding how these forces work and knowing how to control them with the use of power and flight controls are essential to flight.
The four forces acting on an aircraft in straight-and-level, unaccelerated flight are thrust, drag, lift, and weight. They are defined as follows:
- Thrust — the forward force produced by the powerplant/ propeller or rotor. It opposes or overcomes the force of drag. As a general rule, it acts parallel to the longitudinal axis. However, this is not always the case.
- Drag — a rearward, retarding force caused by disruption of airflow by the wing, rotor, fuselage, and other protruding objects. As a general rule, drag opposes thrust and acts rearward parallel to the relative wind.
- Lift — is a force that is produced by the dynamic effect of the air acting on the airfoil, and acts perpendicular to the flight path through the center of lift (CL) and perpendicular to the lateral axis. In level flight, lift opposes the downward force of weight
- Weight — Gravity is the pulling force that tends to draw all bodies to the center of the earth. The CG may be considered as a point at which all the weight of the aircraft is concentrated. If the aircraft were supported at its exact CG, it would balance in any attitude. It will be noted that CG is of major importance in an aircraft, for its position has a great bearing upon stabilite. 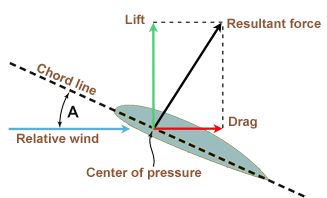 The total drag of an aircraft is composed of many drag forces, but only three will be studied: parasitic drag, profile drag and induced drag.
When an airfoil is flown at a positive AOA, a pressure differential exists between the upper and lower surfaces of the airfoil. The air on the upper surface has a tendency to flow in toward, and the air on the underside tends to flow towards the tip of the wing.
When the respective flows of the lower and upper surface eventually meet at the trailing edge of the wing, they cross each other and form small (very small) vortices downstream of the wing 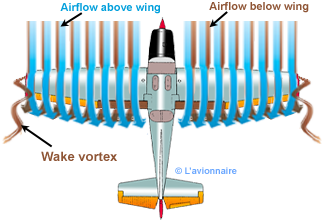 Since air always moves from high pressure toward low pressure, and the path of least resistance is toward the airfoil’s tips, there is a spanwise movement of air from the bottom of the airfoil outward from the fuselage around the tips. This flow of air results in “spillage” over the tips, thereby setting up a whirlpool of air called a “vortex.” 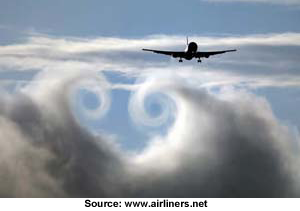