An airfoil (American English) or aerofoil (British English) is the cross-sectional shape of a wing, blade (of a propeller, rotor, or turbine), or sail (as seen in cross-section).

There are very many profiles which are classified according to their shapes by family. 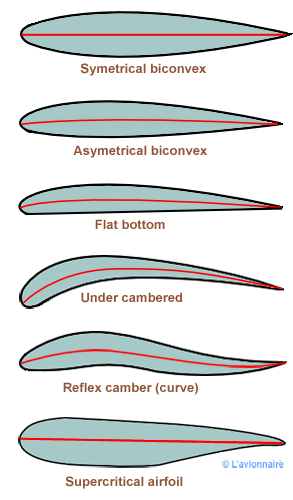 Number and position of main planes

Fixed-wing aircraft can have different numbers of wings and the wing may be mounted at various positions relative to the fuselage.

The biplane is inherently lighter and stronger than a monoplane and was the most common configuration until the 1930s.
Unequal-span biplane : a biplane in which one wing (usually the lower) is shorter than the other.
Sesquiplane : literally "one-and-a-half planes" is a type of biplane in which the lower wing is significantly smaller than the upper wing, either in span or chord or both.
Triplane : three planes stacked one above another.

The aspect ratio is the span divided by the mean or average chord. It is a measure of how long and slender the wing appears when seen from above or below.
Low aspect ratio : short and stubby wing. More efficient structurally and higher instantaneous roll rate. They tend to be used by fighter aircraft, such , and by very high-speed aircraft.
Moderate aspect ratio : general-purpose wing, very widely used.
High aspect ratio : long and slender wing. More efficient aerodynamically, having less induced drag. They tend to be used by high-altitude subsonic aircraft such as airliners. 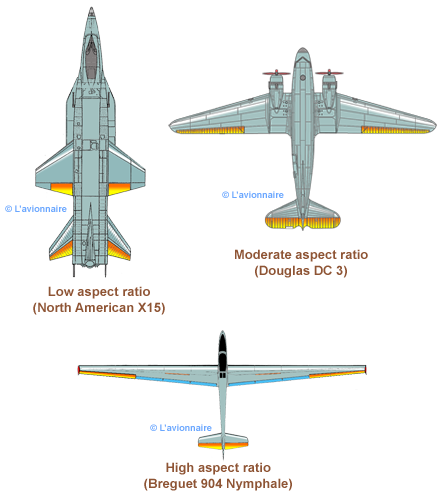 Wing design can vary to provide certain desirable flight characteristics. Control at various operating speeds, the amount of lift generated, balance, and stability all change as the shape of the wing is altered. Both the leading edge and the trailing edge of the wing may be straight or curved, or one edge may be straight and the other curved. One or both edges may be tapered so that the wing is narrower at the tip than at the root where it joins the fuselage. The wing tip may be square, rounded, or even pointed.

Constant chord : parallel leading & trailing edges. Simplest to make, and common where low cost is important.
Constant chord with Tapered Outer : his is midway between the rectangular and the tapered wing. Common variant seen for example on many Cessna types.
Trapezoidal : a tapered wing with straight leading and trailing edges: may be unswept or swept. The straight tapered wing is one of the most common wing planforms.
Elliptical : aerodynamically, the elliptical planform is the most efficient as elliptical spanwise lift distribution has the lowest possible induced drag. The most important disadvantage is that its manufacturability is poor. 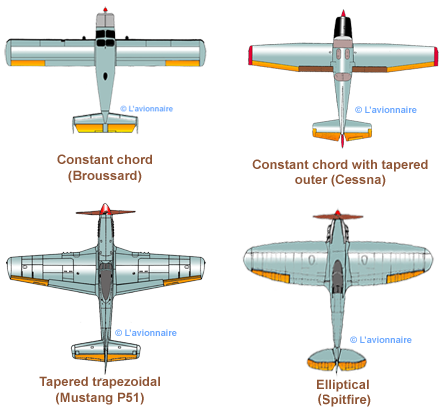 Wings may be swept back, or occasionally forwards, for a variety of reasons. A small degree of sweep is sometimes used to adjust the centre of lift when the wing cannot be attached in the ideal position for some reason, such as a pilot's visibility from the cockpit. Other uses are described below.
Straight : extends at right angles to the line of flight. The most structurally-efficient wing, it has been common for low-speed designs since the very first days.
Swept back (aka "swept wing") : The wing sweeps rearwards from the root to the tip. In early tailless examples, such as the Dunne aircraft, this allowed the outer wing section to act like a conventional empennage (tail) to provide aerodynamic stability. At transonic speeds swept wings have lower drag, but can handle badly in or near a stall and require high stiffness to avoid aeroelasticity at high speeds.
Forward swept :the wing angles forward from the root. Benefits are similar to backwards sweep, also it avoids the stall problems and has reduced tip losses allowing a smaller wing, but requires even greater stiffness to avoid aeroelastic flutter.
Variable geometry wing: The variable geometry wing is a wing whose shape can be changed during flight, in order to make an aircraft capable of operating at different speeds without loss of efficiency. 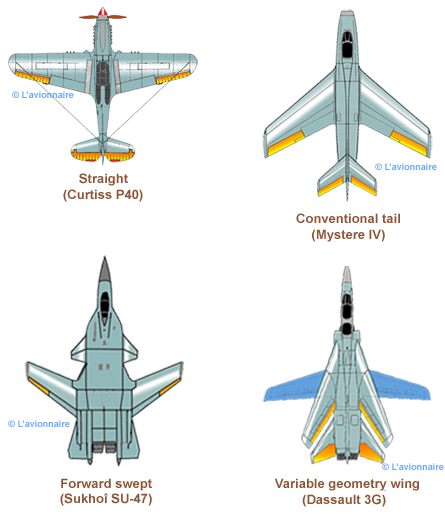 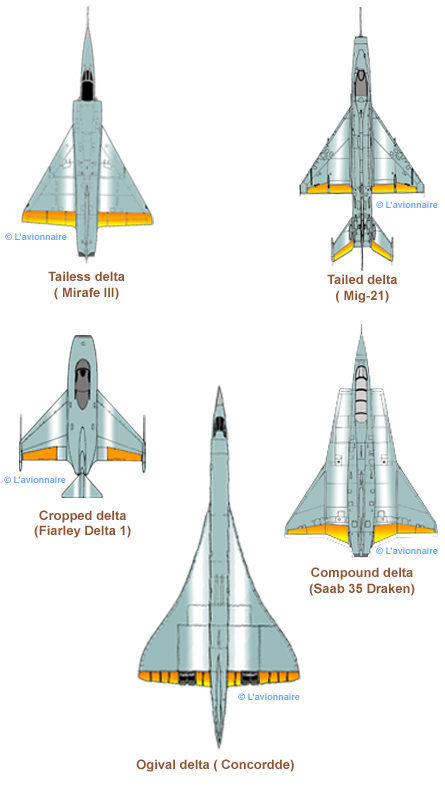 Trapezoidal wing : This high-performance wing is characterized by low elongation with a positive-boom leading edge while the trailing edge has a negative boom.
Flying wing : the aircraft has no distinct fuselage or horizontal tail (although fins and pods, blisters, etc. may be present 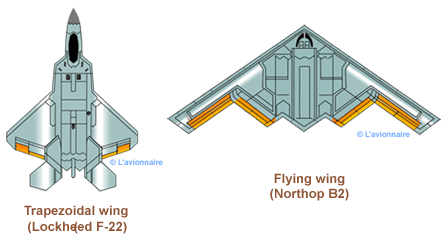 The classic aerofoil section wing is unstable in pitch, and requires some form of horizontal stabilizing surface. Also it cannot provide any significant pitch control, requiring a separate control surface (elevator) mounted elsewhere.
Conventional : "tailplane" surface at the rear of the aircraft, forming part of the tail or empennage.
Canard : "foreplane" surface at the front of the aircraft. Common in the pioneer years, but from the outbreak of World War I no production model appeared before 1967.
Tandem : two main wings, one behind the other. Both provide lift; the rear wing provides pitch stability (like a normal tailplane). To ensure longitudinal stability, the wings must have different aerodynamic characteristics: in general, the wing loading and/or the airfoils differ between the two wings.
Three surface : both conventional tail and canard auxiliary surfaces. 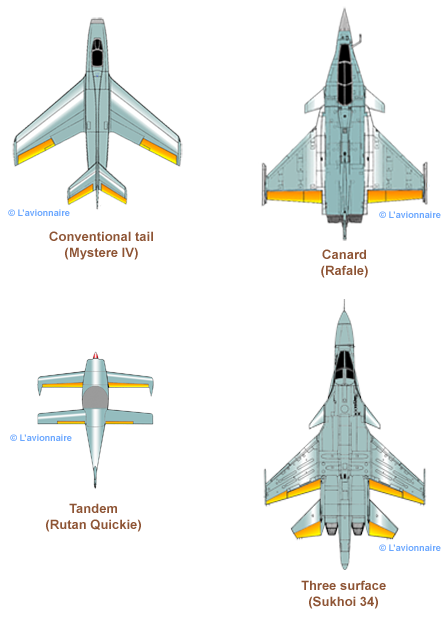 Angling the wings up or down spanwise from root to tip can help to resolve various design issues, such as stability and control in flight.
Dihedral: the tips are higher than the root as giving a shallow 'V' shape when seen from the front. Adds lateral stability.
Anhedral: the tips are lower than the root, the opposite of dihedral. Used to reduce stability where some other feature results in too much stability.
Some biplanes have different degrees of dihedral/anhedral on different wings. 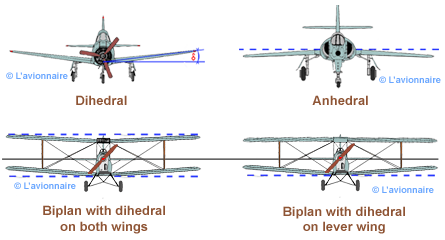 Gull wing : sharp dihedral on the wing root section, little or none on the main section. Sometimes used to improve visibility forwards and upwards and may be used as the upper wing on a biplane.
Inverted gull wing : anhedral on the root section, dihedral on the main section. The opposite of a gull wing. May be used to reduce the length of wing-mounted undercarriage legs while allowing a raised fuselage.
Cranked tip : tip section dihedral differs from the main wing. The tips may have upwards dihedral or downwards anhedral.

The above drawings were made from Richard Ferrière's 3 views plans.  http://richard.ferriere.free.fr